It is generally accepted that, to move the governmental sector toward better performance, governmental agencies need to adopt high-performance management techniques. One such technique is the HPO (high-performance organization) Framework, which has been applied successfully in many countries. However, most of these applications were in developed countries and in the private sector, which raises the question of whether the framework would work equally well in an African governmental setting. Specifically, this study posits, and proposes to answer, the following three research questions: (a) Can the HPO Framework be used to evaluate the strengths and weaknesses of Zambian governmental institutions and yield tangible recommendations to achieve sustainable high performance? (b) If so, can the performance of these institutions subsequently be shown to improve over time? (c) What is the role of the institutions’ managers in a successful implementation of the framework? To explore these considerations, the HPO Framework was applied at three Zambian governmental institutions. In a longitudinal research set-up, the application and accompanying organizational results were tracked. The study results
showed that the HPO Framework is indeed applicable in the Zambian governmental sector and can significantly contribute to it becoming high-performing. However, the study’s results also made clear that full commitment from management has to be ensured before embarking on an HPO transition. This research is the first of its kind: a longitudinal study of the workings and effects of an HPO framework, in the 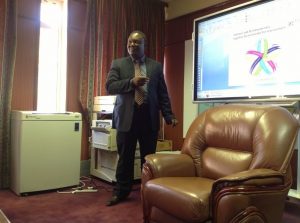 It is generally accepted that, to move the governmental sector toward better performance, government agencies need to adopt and institutionalize high-performance management principles, such as those from the New Public Management (NPM) framework (Andrews & Van de Walle, 2013; Dzimbiri, 2008). NPM reforms focus on empowering citizens to put legitimate pressure on governmental organizations
to do better (Government of the Republic of Zambia, 2008), and for the realization of Zambia’s “Vision 2030” (Government of the Republic of Zambia, 2006). NPM has been cited as the favored system with which to achieve higher gross domestic product (GDP) growth rates and poverty reduction (Government of the Republic of Zambia, 2005). However, despite these reforms, the performance of Zambian governmental institutions has continued to fail, in terms of both the quantity and the quality of services expected by taxpayers. As Mulenga (2013) observed, “The abysmal state of the governmental sector in Zambia is no secret to the consumers.” In part, this failure is due to the disappointing effectiveness of the NPM model in developing countries, caused, according to Atreya and Armstrong (2002), Bartley and Larbi (2004), and Mongkol (2011), by the fact that developing countries (a) lack the capacity to successfully implement NPM reforms; (b) their governmental sectors are afflicted by corruption and nepotism, and such practices hinder NPM; (c) their infrastructure for managing reforms is not sufficiently effective in supporting market-oriented shifts; (d) they do not have adequate laws and enforcement mechanisms
in place to manage contractual arrangements for service delivery; (e) not all aspects of the NPM framework are useful for them and the NPM commitment to privatization is difficult to realize because there isn’t the administrative capacity to undertake this complex task successfully…

Read the article, published in SAGE, in PDF!