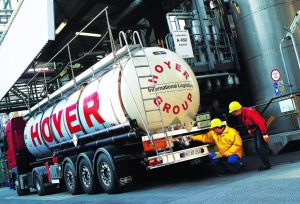 by André de Waal and Miriam Frijns
The authors are grateful to Menno Douwes Dekker, managing director of Hoyer Global Transport, for allowing us to conduct research at his company.

Much research has been done into multinational enterprises (MNEs) but a holistic approach to studying all the potential factors that affect the performances of MNEs is still missing: most studies look at only one or a limited number of factors that may influence the performance of MNEs. This gap in the literature can be filled by applying the recently developed High Performance Organization (HPO) Framework in an MNE setting. This validated framework was developed based on a worldwide survey, with the explicit goal of identifying the main factors that influence sustainable high performance and a such the framework provides a holistic overview of performance. The Hoyer Global Transport case study in this article applies the HPO Framework at a subsidiary of a MNE, in order to evaluate whether the framework can be applied in a multinational setting. In addition, the research in this article also looks whether the HPO Framework takes into account the cultural context as the case subsidiary is located in Dubai. The research results show that the HPO Framework can indeed successfully be used to evaluate the performance of a subsidiary of a multinational operating in the Middle Eastern context.

In the past decades the research into multinational enterprises (MNEs) has been extensive (Nguyen, 2011). This is not surprising as the increasing globalization that took place during the second half of the 20th century has made the role and impact of these global enterprises much more pronounced (Kanter, 2009). In this research, several main topics can be discerned. The first main topic is the role of human resource management (HRM) in MNEs. Many studies in this area conclude that implementing well-designed HRM practices is positively related to the performance of the MNE, with the note that the HRM practices of an MNE can have different effects in different countries (Butteriss, 1998; Bae and Lawler, 2000; Ahmada and Schroeder, 2003; Brewster et al., 2005; Mohamed and Singh, 2010). Other studies explore HRM issues such as reward structures in MNEs (Hempel, 1998; Stredwick, 2000), leadership styles occurring in MNEs (Rodsutti and Swierczek, 2002; Berson et al., 2004), country of origin effects apparent in MNEs (Edwards et al., 2010; Almond, 2011), and talent management practiced by MNEs (Iles et al., 2010; McDonnell et al., 2010).

A second main topic is the impact of country culture on the performance of MNEs. Research studies in this area often apply Hofstede’s work on national cultures (Hofstede, 1980), and deal with issues like the rate of adoption of new forms of work practices or technology in MNEs in different cultural settings (Offereins and Fruytier, 2006; Guo and D’Ambra, 2009; Cagliano et al., 2011), inefficiencies in managerial practices in different countries (Brock et al., 2000; Halkos and Tzeremes, 2011), the role of national culture in the composition of teams (Salk and Brannen, 2000) and the setting-up of the organizational structure (Williams and Triest, 2009), the effect of national culture on the success of acquisitions by MNEs (Brock, 2005), and ethical issues in MNEs influenced
by national cultural differences (Cohen and Pant, 1993; Robertson and Fadil, 1999). A third main topic is the effect of globalization itself on the MNE. Research issues in this area are the management structures needed in MNEs (Kidger, 2002), the impact of internationalization on the composition of global companies (Martelli and Abels, 2011), and the diffusion of management, learning, HRM and R&D/innovation practices throughout the MNE to the different country organizations (Doeringer et al., 2003; Zeng et al., 2009; Becker-Ritterspach et al., 2010; Wiele and Iwaarden, 2010; Mortara and Minshall, 2011).

In addition to these main topics of research, several other topics are studied. For instance, Nguyen (2011) looked at the impact of MNE’s strategic investment motives on performance and the strategies MNEs employ to optimalize their value chains. Guillén (2005) investigated the reasons why at the end of the last century many more Spanish multinationals came into existence, and he credits the ability of these Spanish companies to adapt to changing circumstances and adverse conditions for this. Gibson and Birkinshaw (2004) looked within MNEs at the consequences the ambidexterity of people and systems has on organizational performance. Doz et al. (2001, p.5) researched how a “new age multinational” would look like, and found that these so-called metanational companies do not obtain competitive advantage from their home country or from their set of national subsidiaries, but from viewing the world as “a global canvas dotted with pockets of technology, market intelligence, and capabilities, and mobilizing these to innovate more effectively than their competitors.” Bakker et al. (2004) varied on this theme by stating that companies that operate internationally have to turn themselves in international network corporations, comprising of a group of interconnected operations with an emphasis on long-term internal partnerships in which expertise from various sectors can be combined and new solutions can be delivered to different clients and markets.

Finally, another topic of research interest is how MNEs deal with corporate social responsibility. This is an increasingly important issue as MNEs can have a great impact on the population of the countries they operate in, and at the same time the way people react to MNEs can affect the performance of the companies considerably (Husted and Allen, 2006; Latteman et al., 2009; Richter, 2011). It is conspicuous that a holistic approach to studying all the potential factors that affect the performances of MNEs, to the knowledge of the authors, cannot be found. Most research studies look at only one or a limited number of factors that may influence the performance of MNEs, which means that in subfields we know what affects performance but we still do not have a complete and holistic overview of the main factors that influence the results of MNEs. This gap in the literature can be filled by applying the recently developed High Performance Organization (HPO) Framework in an MNE setting. This validated framework was developed based on a literature review of 290 studies into HPOs and a worldwide survey, with the explicit goal of identifying the main factors that influence sustainable high performance and a such the framework provides a holistic overview of performance (Waal, 2006 rev. 2010, 2012a).

The Hoyer Global Transport case study described in this article takes the HPO Framework and applies it at a subsidiary of a MNE, in order to evaluate whether the framework can be applied in a multinational setting. The HPO Framework has been tested in different sectors and in different countries (Godfrey, 2010; Waal and Chachage, 2011; Waal and Frijns, 2011; Waal and Haas, J. de, 2013; Waal and Sultan, 2012; Waal and Tan Akaraborworn, et al., 2004). This calls for exploratory research in which the HPO Framework is tested in a Middle Eastern setting, in order to gauge whether this framework can be used successfully at the MNE’s subsidiary to evaluate the organization’s performance and to pinpoint improvements. The research question is therefore formulated as follows: Can the HPO Framework be used to evaluate the performance of a subsidiary of a multinational operating in the Middle Eastern context? This research will thus fill a gap in the literature both on MNEs and on HPOs. More specifically, the theoretical contribution of this article lies in the fact that this is the first time the HPO Framework is used at an organization in Dubai to evaluate its performance and to identify areas for improvement, and the lessons learned will open up avenues for further research. The practical contribution will be that other subsidiaries of MNCs can start using the HPO Framework as the basis for their improvement efforts.

The remainder of this article is organized as follows. The second section goes into previous HPO research (Waal, 2006 rev. 2010, 2012a), discussing the results of an extensive literature review and the subsequent worldwide survey. A description of the HPO factors identified in this HPO research is given in the third section. The fourth section provides details on the case company (Hoyer Global Transport). The fifth section deals with the research approach and results. The article ends with the conclusion, limitations of the research and suggestions for further research.

Read the complete ‘Hoyer Global Transport Case – Applicability of the HPO Framework in a subsidiary of a multinational’ in this PDF file!